The tenth annual smartgeometry event has just finished in London, and was held at the Bartlett School of Architecture. Previous years’ events have been held at Troy, Copenhagen, Barcelona, New York and San Francisco with institutions bidding for the privilege of hosting the event. This year’s sticking point was wether UCL had a conference auditorium that could hold 900 people.

The event is organised loosely round a theme, this year constructing for uncertainty, and round a series of 10 clusters or workshops which organisations also bid to host. This year there were 40 bids of which the following 10 were accepted. 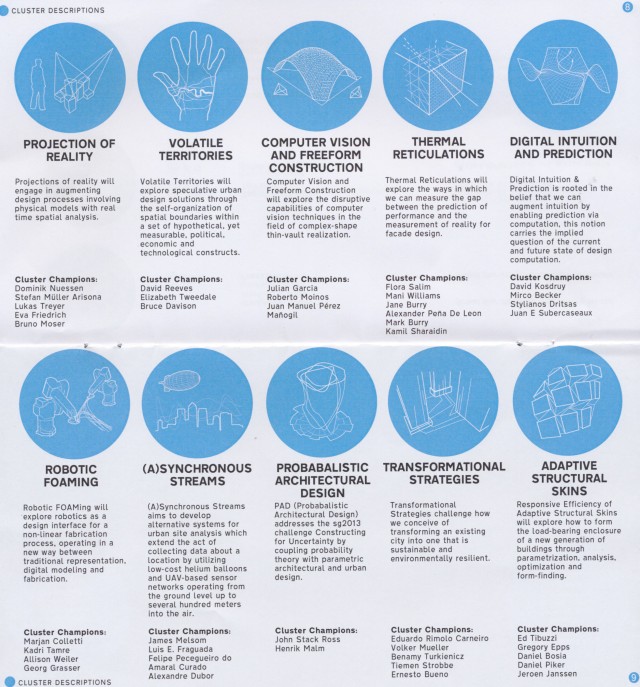 Starting on Monday the event consists of 4 days of workshops culminating in an exhibition on Thursday evening followed by a Talk-shop day on Friday and a full-blown Conference on Saturday.

I took part in the Projections of Reality cluster which was championed by ETH Singapore. The concept sketch prepared before the workshop was as follows. 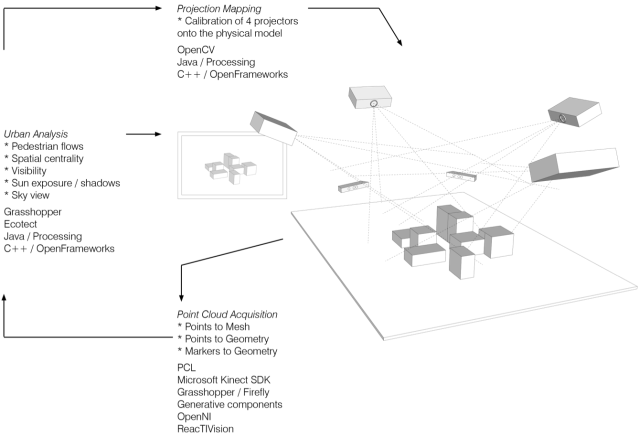 The idea was to have a physical block-world model on a 1m x 1m table. The position and size of the boxes to be sampled by 2No Kinects and processed into a CAD model which could have a variety of analyses applied to it; the results of which would be displayed back onto the physical block-world in real time. The idea being that the physical block-world could act as a very natural and intuitive interface to computer based applications. That is you could rearrange the blocks and immediately see how the new arrangement affected the application.

It was decided to limit the world to rectangular blocks but to allow non orthogonal placement. After a lot of discussion an interesting decision was made about what to do when blocks touched and joined together. In the style of Processing, which was driving the scanning, it was decided to make joined blocks into new entities with no knowledge of their  past.

This was particularly useful for a simple application which coloured the blocks according to their size.

The method of calibration of the 4No Projectors had been largely resolved in Singapore so the group was able to get the scanning, building the CAD model and projecting the analysis results to work in a pretty satisfactory manner and were able to get a number of applications up and running.

This included a very nice shadow application were the Kinect scanned the position of your hand representing the position of the sun; one visiting partner of a large practice delightedly said that he had always wanted to play God in this way. A number of attempts were made to provide a pointer device for some of the applications that required a start or end point to be indicated particularly for an agent route finding application. Laser pointers and LED pucks were tried but the relative shallowness (128 levels) of the colour space of the Kinect RGB  camera meant that the brightest point search always found something that was as bright as possible before it found something that was accually physically brighter.

Since the end of smartgeometry 2013 it appears that simple physical interaction with a virtual model is something of a hot topic with a short article in this weeks New Scientist and this neat way of calibrating projection display surfaces being published.

Seems strange that the car has to be instrumented, when it would do just as  well to instrument the surface it sits on.

The other clusters that I found particularly interesting or just plain peculiar were.

This used a simple webcam and fixed QR Codes to guide the construction of complicated freeform shapes from common building materials.

In one example a master bricklayer was guided in the construction of a freeform vault using hollow flooring tiles and in another un-trained students built a flower shaped form from glasscrete blocks. In both cases the delight was in a simple application of technology being applied to an essentially craft process in order to facilitate the production of a complex form.

This had 3 expensive looking robots manipulating a ball of polyurethane and I think plaster that was mixed in a dirty bucket and stirred by hand with a stick. 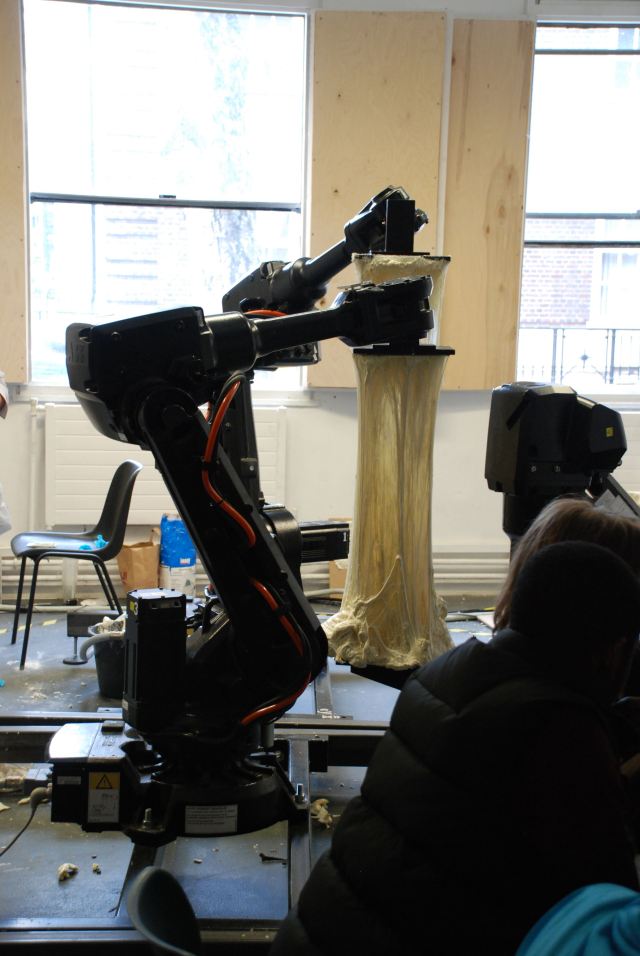 This cluster was hosted by  the Institut for Experimental Architecture, Innsbruck and produced objects like this:-

This workshop was hosted by the Bartlett and produced a number of full scale enclosures. This example, although it did not use actuators, showed how the use of different length connectors and standard shaped panels could be used to change the shape of an enclosure. 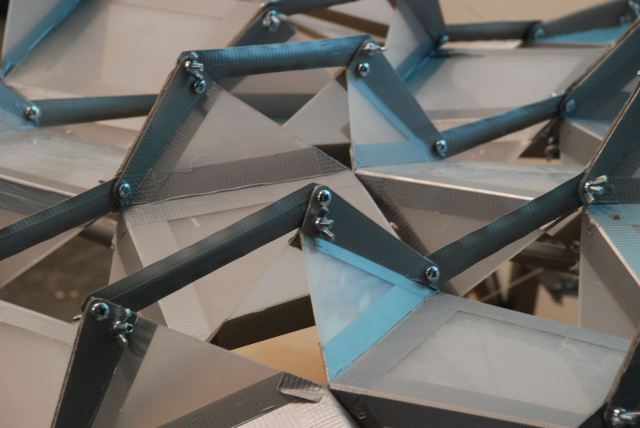