Posted on September 23, 2014 by Graham Shawcross

George Lakoff has pointed out that we do not normally distinguish numbers from what might be more properly be called number names. (Lakoff 1989)  The most common number naming systems adopt base-10 and use ten single-digit number names, for instance (0, 1, 2, 3, 4, 5, 6, 7, 8 and 9). They then form other multi-digit number names (21,  1342 etc) from these basic number names, or numerals, using a positional representation. With Arabic numerals this starts with the rightmost numeral being the quantity of units and the next leftward numeral being the quantity of tens and so on.

But many other bases are possible, the next most common probably being base-2 or binary, with just two basic number names (0 and 1). The difference between numbers and number names can therefore perhaps best be understood by realising that the number name ‘3’ in base-10 (3 × 100) represents the same quantity or numerosity as the number name ’11’ in base-2 ((1 × 21 ) + (1 × 20)). That is the base used, as well as the digits or glyphs adopted, can change the way any particular quantity, numerosity or number is represented.

Number names in this sense are different and distinct from number words, the verbal version of numbers, the way numbers are spoken or transliterated, (one, two, three etc.). see Five Finger Exercises

In English, verbal numbers are organised as a hybrid series of additions and multiplications summarised, for the cardinal Arabic number 350172, by the graph below where the plus signs indicate addition and the X signs multiplication.

This system involves a combination of simple number words; one, two, three etc., some special multiplier words like hundred, thousand etc and the particularly English -ty words like sixty, seventy, eighty and ninety plus the slightly modified twenty, thirty, forty and fifty. And -teen words like thirteen, fourteen etc. plus the unique eleven and twelve. 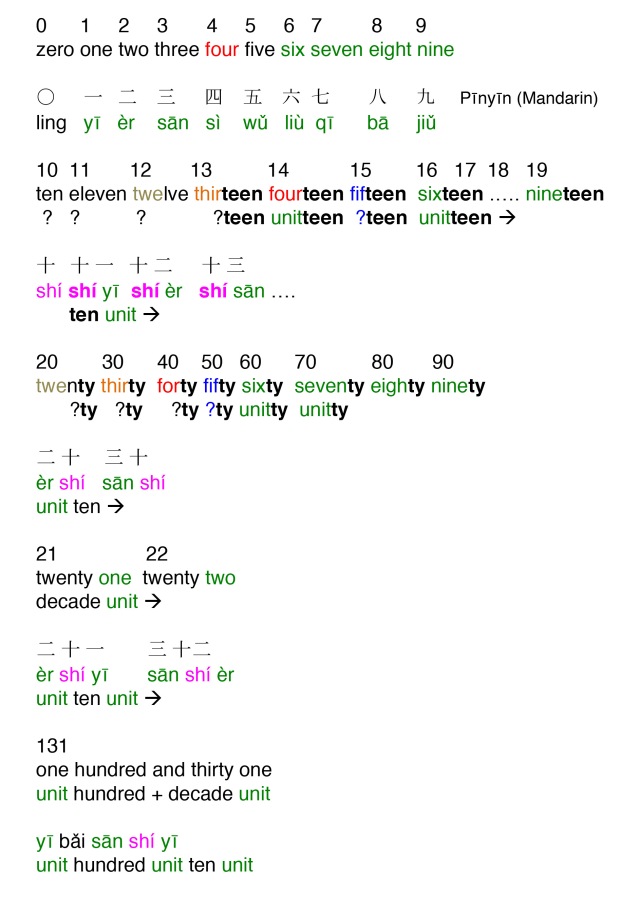 Some of the extra complexity of English number words derive from spelling conventions rather than word sound, for instance eigh[]teen, fo[]rty and eigh[]ty. There is also some evidence of pronunciation slippage. Thus twelve and twenty to avoid the awkwardness of twoteen and twoty, thirteen and thirty to avoid threeteen and threety and fifteen and fifty to avoid fiveteen and fivety.

In English the initial verbal ordinal words are the unique first, second, and third, but typically ordinals have a th suffix added to the cardinal name for the number, so fourth, sixth, seventh, nineth, and tenth plus the slightly modified in spelling terms fif[]th, and eigh[]th. The multiple powers of ten have an ieth suffix replacing the y ending of the cardinal name, so twentieth from twenty, thirtieth from thirty, fortieth from forty etc. Again these are organised as a hybrid series of additions and multiplications.

In English the Arabic version of ordinals borrow their suffices from the end of their verbal equivalents, so we have 1st (from first), 2nd (from second) and 3rd (from third), followed by 4th .. 20th then 21st, 22nd and 23rd etc.

The first three English ordinals have interestingly varied etymologies.  First derives from the Old English fyr(e)st and Old Norse fyrst, having the sense of furthest forward, and the German Fürst, a prince, that is furthest forward in rank. Second derives from the Latin sequi follow, secundus following and second via Old French into Middle English. Third derives from Old English thridda via English thrid which was the most common spelling until the 16th century.

When speaking of fractions a half is used for 1/2, a quarter for 1/4 and three quarters for 3/4 but a fourth is also used in music. Otherwise ordinals are used as in a third for 1/3, a fifth, a sixth etc. In the more general case a cardinal number is used for the numerator and an ordinal for the denominator, so 2/3 is two thirds and 19/32 is nineteen thirty seconds etc.

Literate English speakers have no problem reading, writing, comprehending or producing all these systems and transcoding between them even though there is evidence, through the study of patients with deficits in one or more of these capacities, of a neurological dissociation between the verbal and written systems (McCloskey 1992)

1 Response to Number Names and Words