In 2011 Dan Shechtman was alone awarded the Nobel Prize in Chemistry for the discovery of quasicrystals.

Shechtman found in 1982 that atoms in a crystal could exhibit 5 fold symmetry packed in a pattern that did not repeat itself; analogous to aperiodic tiling in 2 dimensions.

He was ridiculed because this result contradicted accepted crystallographic theory. 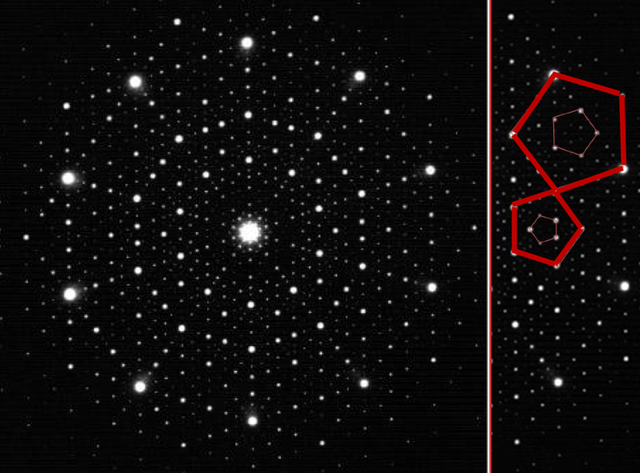 Shechtman then experienced several years of hostility; Linus Pauling even said “There is no such thing as quasicrystals, only quasi-scientists.” (Hargittai 2011)

Up until now there have not been many practical applications of quasicrystals, but hard steel quasicrystals embedded in softer steel are used in some razor blades and in some thin needles used in eye surgery.

Marjorie Senechal in Quasicrystals and Geometry (Senechal 1996) says that

“Increasingly, mathematicians and physicists are becoming intrigued by the quasicrystal phenomenon, and the result has been an exponential growth in the literature on the geometry of diffraction patterns, the behaviour of the Fibonacci and other non periodic sequences, and the fascinating properties of the Penrose tilings and their many relatives.”

“What Quasicrystals have done for Mathematics”

Her main argument is that the discovery of quasicrystals has encouraged mathematicians to think visually again. In this respect she also gives credit to Martin Jay’s Downcast Eyes: The Denigration Of Vision In Twentieth-Century French Thought, (Jay 1994).

Claude Bragdon gives an early historical perspective on projective geometry but to my mind heavily tainted with Astral Planes and Theosophy. (Loftus 1999)

In particular he shows how aperiodic Penrose tiling can be projected from 4 dimensional models, and gives a 2 dimensional example of how the projective method works.

This shows the relation of irrational numbers to so called musical sequences and thence to Penrose Tiling. 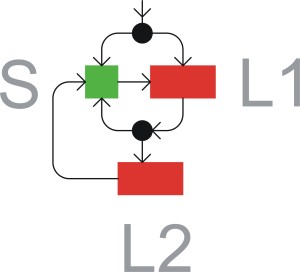 Continuous inflation or composition proves the ability of aperiodic tiling to cover the plane. The substitutions are also suitable for L-System application.

The interactive program called Quasi Tiler produces outputs like that shown below, it shows the 4 dimensional structure and the Penrose  aperiodic tiling generated by projection from it

A fairly full description of the program is available at http://www.geom.uiuc.edu/apps/quasitiler/about.html#conclusion

The program is not currently working but source code is available and could be resurrected at the price of learning Java.

2 Responses to Quasicrystals and Aperiodic Tiling