Posted on December 6, 2013 by Graham Shawcross

This is another list, probably even a listicle, of objects with eccentric properties. In this case objects that are, or were originally, named for the materials they are made of.

“Wentworth likes objects that are called after the stuff they are made of: a rubber, a glass, a straw, a tin, a cork, a cane. But this aesthetic should be seen in the context of a broader rejection of representation itself and representation’s traditional connections with anthropomorphism and the pastoral — with dream conjurings of ideal bodies and other places.

a rubber: This still seems to hold true even though the material may not now always be natural rubber.

a glass: Certainly holds true even though the concept might be expanded to include plastic glasses, for instance you can usually take your (plastic) glass into the cinema.

a straw: A stale metaphor, today drinking straws are nearly always made of plastic rather than straw. I prefer stale metaphor rather than dead metaphor because I think the latter should be reserved for when the reference has become so weak that it can only be traced or understood with the help of an etymological dictionary. For most people however, I think the straw metaphor is  quite near to being dead.

a tin: Fairly straightforward, but see https://grahamshawcross.com/2012/07/11/the-container-for-the-thing-contained/ for a discussion of the Container for The Thing Contained a special type of metonymy  much loved by James Thurber as in his story Here Lies Miss Groby (Thurber 1942, 1954)

a cork: Probably fairly secure, though there are now an increasing number of ‘plastic corks’.

a cane: For most people I think quite arcane, perhaps only remembered, if at all, through song lyrics such as “Hand me down my walking cane”.

a quill: Accurate but a fairly archaic and uninteresting object.

an iron: For pressing clothes; these were historically made of iron,  often designed to be filled with hot coals, otherwise a very stale or dead metaphor.

an iron: A type of golf club, a metonym with the whole being named after a part, the head of the club.

a wood: Another type of golf club, also a metonym, but modern woods are now more often made of metal, a stale metonym?

a slate: Another archaic object but I do have a picture of me sat in Junior School, aged 5, with a slate in front of me, learning to write (extreme left)

This object is also capable of being a metaphor, as in a political “slate of candidates”.

a chalk: Useful for writing on slates and literally or metaphorically “chalking things up”. Note also the cloths on the desks for “wiping the slate clean”.

coppers: True for coins but not for policemen. I think this cannot be singular, “give me a copper” does not really work.

silver: True for coins, for instance the biblical “pieces of silver”. Again I think cannot be singular if referring to a coin.

a nickel: True for a coin or coins, that is, can be plural.

ivories:  True when referring to the actual piano keys, including the black ones? More usually a metonym as in “tinkling the ivories” meaning playing the piano, a part giving its name to the whole.

a bronze: A sculpture, bas-relief etc.

a canvas: For painting on, but also used metaphorically in  computer graphic programs such as Photoshop and many others

a paper:  A newspaper in colloquial usage, a metonym. An academic paper sometimes written directly onto paper, a metonym, but now more often produced electronically and that may never even be printed onto paper, a stale metonym?

a fur: Now being worn again on models’ backs.

a fleece: Clever marketing-speak use of metaphor, but have always been made from polypropylene or other artificial materials.

leathers: As worn by Hells Angels and other motorcyclists.

I appeciate that I am, tongue in cheek, not using embodiment in the usual way, but rather to represent a certain type of self coding or self reference.

Generally there seems to be a tendency for the materiality and  self coding embodiment present in these objects to be fading fairly rapidly as new materials are substituted for those  that the objects were originally named for. Leaving these objects to become stale and eventually dead metaphors.

However there is also the interesting case of objects that are just self coding such as plastic lemon juice bottles made to look like fairly realistic lemons. I particularly like the leaves.

And finally visual puns, for example this money box in the form of a loaf of bread. 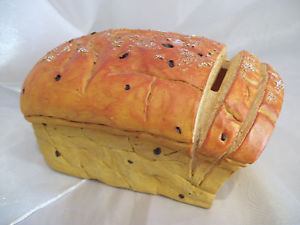