Posted on November 8, 2014 by Graham Shawcross

This is a short post on emergent images, still or moving images where objects at first only appear with effort and concentration, but once recognised are very easy to see again even after several months or years. In effect once you have recognised the object you remember it forever.

Emergence refers to the unique human ability to aggregate information from seemingly meaningless pieces, and to perceive a whole that is meaningful. (Mitra et al 2009)

Try your luck with the image below

There are four objects hidden in the image above, with some supposed to be harder to see than others.

I have used this example rather than the more common one, due to R.C. James, because I assume many people have already seen this and would easily recognise the hidden object.

The first image above, of four rabbits, was produced algorithmically from a computer generated 3D model. The aim of the system is to produce emerging images (and videos) of varying difficulty that can resist current object finding bots and yet be able to be recognised by humans. (Mitra et al 2009)

Rather in the style of a CAPTCHA (a Completely Automated Public Turing test to tell Computers and Humans Apart). The emergence algorithm is summarised below.

The success of the system can be seen in this video. Although no objects can be detected in the individual frames, humans can easily track the moving objects when the frames are connected into a video, whilst bots singularly fail to detect and track them.

There seems to be no intrinsic reason why optical illusions of this sort should only use black and white images. As in this 1590 painting ‘The Market Gardener’ by Arcimboldo which when viewed one way up looks like a bowl of vegetables and a face the other way up.

This probably has more to do with our innate ability from an early age to recognise faces when even very approximate features are presented in an appropriate orientation.

This is an effect that Rex Whistler also takes advantage of with his inverted images and symmetrical books. (Whistler and Whistler 1946 & 1978) 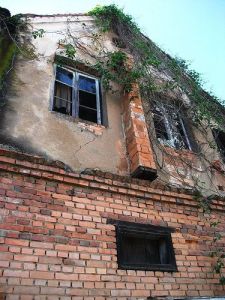 Other accidental faces emerge unbidden. A ‘good’ selection is here. Again I think this is an artefact of innate facial recognition rather than an example of an emergent image.

The purpose of this post is to  differentiate emergence, which is in some ways a one-off event, from some other sorts of  illusion where the effect is on-going, automatic, involuntary and cannot be consciously ignored even when you know you are looking at an illusion.

This applies to the Müller-Lyer illusion above and the acoustic illusion described in a previous post here and the McGurk effect here.

Illusions like the Ames Window here and Ames Room here are also of this automatic, involuntary type.

These are usually called cognitive illusions because the effect contradicts our expectations. Two other types of illusion are generally recognised, literal illusions and physiological illusions.

Literal illusions can be thought of as the result of normal physical laws, for instance the way a stick can look bent in water.

Physiological illusions are usually the result of sensory overload. Aristotle’s waterfall effect and after images generally fall into this category.

The twinkle effect is a perhaps more complicated example where dark spots appear apparantlty randomly within the white dots at the intersection points of a grey on black grid.

Emergent images are to some degree a memory effect, the mental effort of finding the hidden objects somehow ensures that it is easier to find or remember them on subsequent occasions.

Emergent images also support the Gestalt theory that the object only emerges when its component parts are exposed together to give an impression of the whole object.

Emergent images probably relate more to camouflage than other types of optical illusion but in some ways are its opposite. The aim is to create images where objects emerge with effort rather than remain hidden. In effect emergent images might be seen as camouflage that is designed to fail under intense scrutiny.